The first woman in the world to get a dental degree 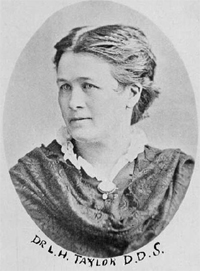 Lucy Hobbs Taylor was an American school teacher and a dentist, known for being the first woman to graduate from dental school (Ohio College of Dental Surgery in 1866). She was born in Ellenburg, Clinton County, New York USA, in 1833. Orphaned at age 12, Lucy worked as a seamstress and later became a schoolteacher at age 16, graduating from the Franklin Teaching Academy in Malone, NY.

She wanted to be a doctor, but when 26 she was denied admittance to the Eclectic Medical College in Cincinnati, Ohio due to her gender. Due to this, a professor in the college agreed to tutor her and encouraged her to practice dentistry. She subsequently applied to a dental school, this time Ohio College of Dentistry. Unfortunately, she was once again refused admittance due to her gender. From there, a college graduate agreed to take her on as an apprentice dentist, allowing her to continue her studies towards dentistry.

In 1862 she moved to Iowa and opened her own dental practice. This allowed her to be accepted as a dentist without the diploma and become part of the Iowa State Dental Society. Being part of this society meant that she was also serving as the group's delegation to the American Dental Associate Convention, only 3 years after moving to Iowa.

By coincidence, that same year (1865) the Ohio College of Dentistry decided to waive the policy prohibiting women being admitted to the institution. Immediately, Taylor enrolled as a senior student thanks to the dentistry experience she had accumulated over the years. She was put on an accelerated course and earned her DDS after only four months of study in 1866, becoming the first woman in the world to graduate from a dental college, and to receive a doctorate in dentistry.

She moved to Chicago, and while practising there she married James M. Taylor, whom she taught to also be a dentist. They moved to Kansas where they had a lucrative joint practice for 20 years.

In 1983, the American Association of Women Dentists honored Taylor by establishing the Lucy Hobbs Taylor Award, which it now presents annually to AAWD members in recognition of professional excellence and achievements in advancing the role of women in dentistry.