The father of modern dentistry. 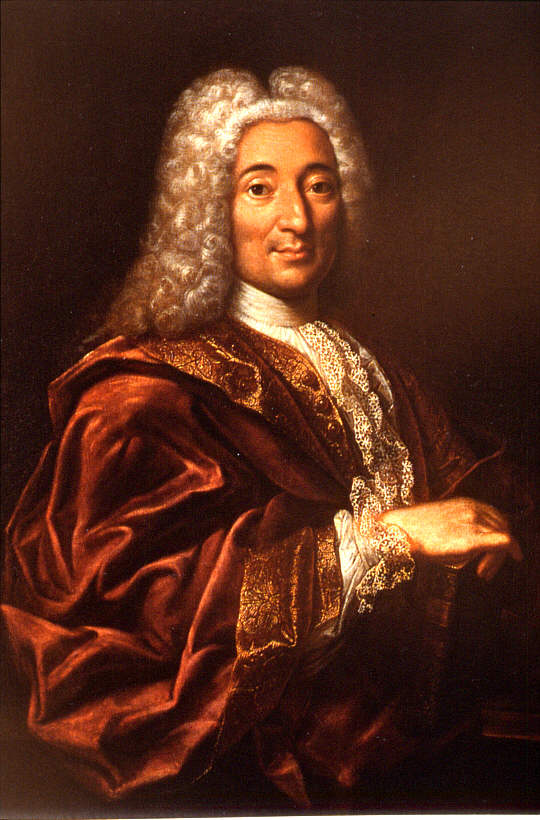 Pierre Fauchard was a French physician, credited as being the "father of modern dentistry". He is widely known for writing the first complete scientific description of dentistry, Le Chirurgien Dentiste ("The Surgeon Dentist"), published in 1728. The book described basic oral anatomy and function, signs and symptoms of oral pathology, operative methods for removing decay and restoring teeth, periodontal disease, orthodontics, replacement of missing teeth, and tooth transplantation.

Fauchard was born in a very modest home in Saint-Denis-de-Gastines in 1679. In 1693 he joined the French Royal Navy at the age of 15, much to his family's distress, and came under the influence of Alexander Poteleret, a surgeon major, who had spent considerable time studying diseases of the teeth and mouth.

During that time, Fauchard learned that sailors who were on long voyages suffered severely from dental ailments, scurvy in particular. Eventually Major Poteleret inspired and encouraged him to read and carefully investigate the findings of his predecessors in the healing arts. He said he wanted to disseminate the knowledge he learned at sea based on actual practice. This idea led Fauchard to become a combat medic as Poteleret's protégé.

Once Fauchard left the navy, he shortly settled down in Angers, where he practiced medicine at the University of Angers Hospital. In Angers, he started much of the revolutionary medical work we know today, and he was the pioneer of scientific oral and maxillofacial surgery. Fauchard often described himself as a "Chirurgien Dentiste" (surgical dentist), a term very rare at the time as dentists in the 17th century generally extracted decayed teeth rather than treating them.

Despite the limitations of the primitive surgical instruments during the late 17th and early 18th century, Fauchard was considered a highly skilled surgeon by many of his colleagues at Angers University Hospital. Fauchard made remarkable improvisations of dental instruments, often adapting tools from watch makers, jewelers and even barbers, that he thought could be used in dentistry.

Fauchard introduced dental fillings as treatment for dental cavities. He asserted that sugar derivate acids like tartaric acid were responsible for dental decay, and also suggested that tumours surrounding the teeth, in the gums, could appear in the later stages of tooth decay.

Fauchard was the pioneer of dental prosthesis, and he discovered many methods to replace lost teeth. He suggested that substitutes could be made from carved blocks of ivory or bone and those artificially-made dental pieces would be useful as the natural ones. One of this methods stated that the artificial teeth would be held in place by tying them to the remaining solid teeth by pivots, using waxed thread or gold wire. He also introduced dental braces, although they were initially made of gold, he discovered that the teeth position could be corrected as the teeth would follow the pattern of the wires. Waxed linen or silk threads were usually employed to fasten the braces.

During 1716 to 1718, Fauchard gained great prestige. During that time he spent long periods away from home studying and sharing his medical practice with other surgeons across France.

In 1718, Fauchard moved to Paris. During his stay in that city, Pierre realised that many medical libraries lacked good textbooks on dentistry and that an encyclopedic teaching book of oral surgery was needed, so he made the decision to write a professional dentist's treatise based on his medical experience.

For many months Fauchard gathered as many medical research books as he could, interviewed the many dentists he had met, and reviewed his personal diaries during his years at Angers to write his manual. Finally in 1723, at the age of 45, he completed the first 600-page manuscript for "Le Chirurgien Dentiste" (roughly translated as "The Surgical Dentist"). Fauchard sought further feedback from his peers over the next five years, and the manuscript had grown to 783 pages by the time it was published in 1728 in two volumes. The book was well received in the European medical community. A German translation was already available in 1733, an enlarged edition in French was published in 1746, yet an English translation had to await 200 more years to 1946.

Fauchard bemoaned how the medical community had largely ignored teeth. He said that "The most famous surgeons having abandoned this part of the art, or at least having paid little attention to it, have caused by this negligence, the rise of people who without theory or experience, have degraded it, and practiced haphazard, without principles or method." He believed that too many tooth-pullers were spending too much time learning how to pull teeth through trial and error, and he believed that people who worked with teeth ought to spend more time learning how to preserve teeth instead.

His book - The Surgical Dentist

The book consisted of 38 chapters in volume 1 and 26 chapters in volume 2. Subjects in his book included Dental Education, Dental Anatomy, Caries, Pathology, Materia Medica and Therapeutics, Orthodontics, Surgery, Replanting and Transplanting, Reflex Nervous Diseases related to mouth diseases, Pyorrhea, Hemorrhages and Styptics, Operative and Prosthetic Dentistry. In addition, both volumes contained 42 plates depicting surgical instruments and appliances. Many of the ideas introduced in the book were totally new to dentistry. Pierre Fauchard engraved in his books many of his inventions of instruments made for oral surgery, such as the obturator and the now famous dentist's drill. The drill Fauchard developed was manual and powered by a catgut twisted around a cylinder. He also suggested in his book that oil of cloves and cinnamon be used for pulpitis.

Fauchard recommended that human urine be used in the treatment of early stages of caries. A chemical compound that he was not able to identify in urine at the time was ammonia, which was responsible for the "beneficial result" of urine. Although urine had been used for this purpose since the ancient times to Middle Ages, the treatment met with resistance by many physicians and patients.

Fauchard described the symptoms of 103 mouth diseases, along how to treat them.

In his book and all his life Fauchard denounced the quackery and fraud of dental charlatans and their exploitation of patients. Pierre advised his students and friends of the highly injurious techniques used by charlatans and to avoid them. He warned his medical readers that nitric acid and sulfuric acid on teeth to remove tartar used by charlatans were potentially dangerous and explained how to identify their false dental fillings. One of the first physicians to denounce medical malpractice in dentistry, he alleged to a tribunal that many dentists in France did not have a degree or experience.

Fauchard became a model for all dentists to come. He died at the age of 82 in Paris on March 22, 1761. He was designated as Maitre Chirurgien-Dentiste, or master in dental surgery, in his burial record.