Dentist and populariser of general anaesthesia. 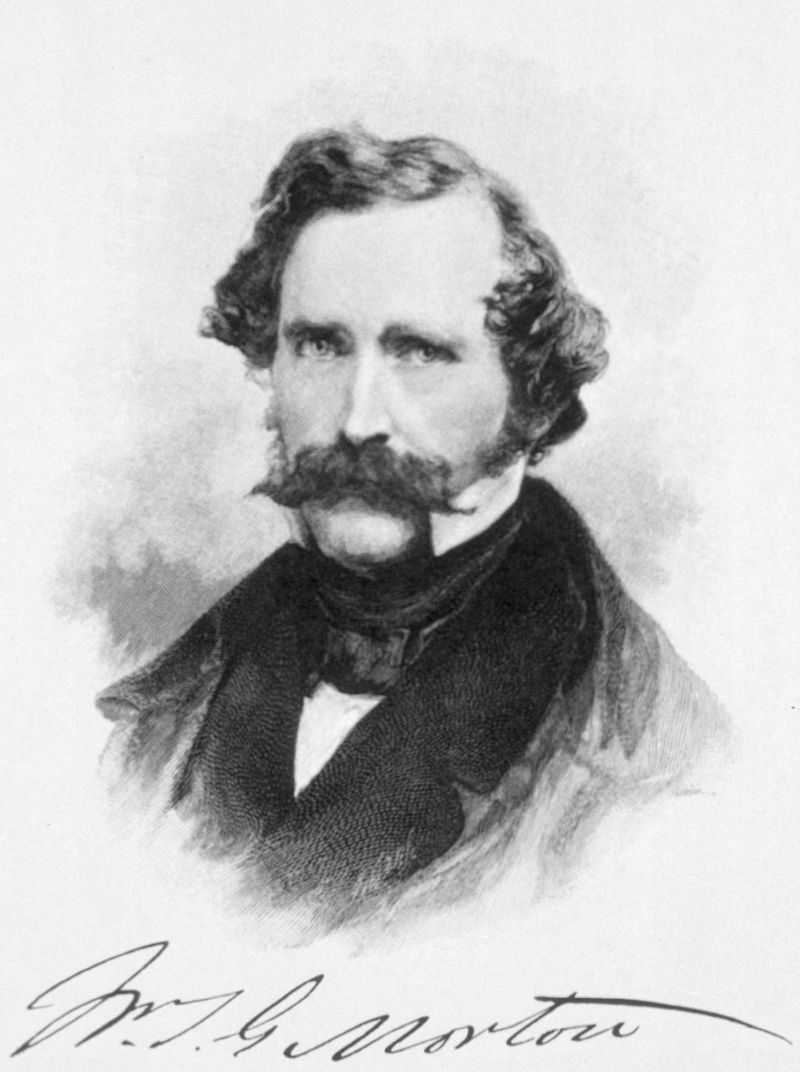 William Thomas Green Morton was an American dentist who first publicly demonstrated the use of inhaled ether as a surgical anesthetic in 1846, with a tooth extraction. The promotion of his questionable claim to have been the discoverer of anesthesia became an obsession for the rest of his life.

Nitrous oxide gas had been demonstrated as a G.A. in late 1844, but did not gain acceptance until 1863.

Born in Charlton, Massachusetts, William T. G. Morton was the son of James Morton, a miner, and Rebecca (Needham) Morton. William found work as a clerk, printer, and salesman in Boston before entering Baltimore College of Dental Surgery in 1840. In 1841, he gained recognition for developing a new process to solder false teeth onto gold plates. In 1842, he left college after graduating to study in Hartford, Connecticut with dentist Horace Wells, with whom Morton shared a brief partnership. Horace Wells was the dentist who later first demonstrated nitrous oxide as a G.A.

In 1843, Morton married Elizabeth Whitman of Farmington, Connecticut, the niece of former Congressman Lemuel Whitman. Her parents objected to Morton's profession and only agreed to the marriage after he promised to study medicine. In the autumn of 1844, Morton entered Harvard Medical School and attended the chemistry lectures of Charles T. Jackson, who introduced Morton to the anesthetic properties of ether. Morton then left Harvard without graduating.

On September 30, 1846, Morton performed a painless tooth extraction after administering ether to a patient. Upon reading a favourable newspaper account of this event, Boston surgeon Henry Jacob Bigelow arranged for a now-famous demonstration of ether on October 16, 1846 at the operating theatre of the Massachusetts General Hospital. At this demonstration John Collins Warren painlessly removed a tumour from the neck of a Mr. Edward Gilbert Abbott.

News of this use of ether spread rapidly around the world, and the first recorded use of ether outside the USA was in London, England, by the dentist James Robinson in a tooth extraction at the home of Francis Boote, an American doctor who had heard of Morton's and Bigelow's demonstrations.

Following the demonstration in Massachsetts, Morton tried to hide the identity of the substance Abbott had inhaled, by referring to it as "Letheon", but it soon was found to be ether.

A month after this demonstration, a patent was issued for "Letheon", although it was widely known by then that the inhalant was ether. The medical community at large condemned the patent as unjust and illiberal in such a humane and scientific profession. Morton assured his colleagues that he would not restrict the use of ether among hospitals and charitable institutions, alleging that his motives for seeking a patent were to ensure the competent administration of ether and to prevent its misuse or abuse, as well as to recoup the expenditures of its development.

Morton's pursuit of credit for and profit from the administration of ether was complicated by the furtive and sometimes deceptive tactics he employed during its development, as well as the competing claims of other doctors, most notably his former mentor, Dr Jackson. Morton's own efforts to obtain patents overseas also undermined his assertions of philanthropic intent. Consequently, no effort was made to enforce the patent, and ether soon came into general use.

In December 1846, Morton applied to Congress for "national recompense" of $100,000, but this too was complicated by the claims of Jackson and Wells as discoverers of ether, and so Morton's application proved fruitless. He made similar applications in 1849, 1851, and 1853, and all failed. He later sought remuneration for his achievement through a futile attempt to sue the United States government. The lawyer who represented him was Richard Henry Dana Jr.

In 1852, he received an honorary degree from the Washington University of Medicine in Baltimore, which later became the College of Physicians and Surgeons.

In the spring of 1857, Amos Lawrence, a wealthy Bostonian, together with the medical professionals and influential citizens of Boston, developed a plan to raise $100,000 as a national testimonial to Morton, receiving contributions from both public and private citizens.

Morton's fame increased when he served as the star defense witness in one of the most notable trials of the nineteenth century, that of John White Webster, who had been accused of the sensationally gruesome murder of George Parkman, a doctor. Morton's rival, Dr Jackson, testified for the prosecution, and the residents of Boston were anxious to witness these nemeses in courtroom combat. (Webster was found guilty and executed.)

Morton performed public service yet again in the autumn of 1862 when he joined the Army of the Potomac as a volunteer surgeon, and applied ether to more than two thousand wounded soldiers during the battles of Fredericksburg, Chancellorsville, and the Wilderness.

Morton died in New York City in July 1868. He was riding in a carriage with his wife when he suddenly demanded the carriage to stop, and he ran into the lake in Central Park "to cool off". This peculiar behavior was because he had suffered a major stroke which proved fatal soon after.

Morton was taken to nearby St. Luke's. It is reported by his wife that upon recognizing Morton, the chief surgeon made the following remark to his students:

Young gentlemen, you see lying before you a man who has done more for humanity and for the relief of suffering than any man who has ever lived.

She then produced three medals, saying that the medals were all he had ever received for his work.

He is buried at Mount Auburn Cemetery in Watertown and Cambridge, Massachusetts USA.